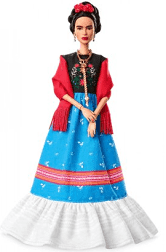 So let’s talk about the best known in the United States, Frida Kahlo. Her image might be even more famous than her art, appearing on t-shirts, coffee mugs, purses, pillows, and, yes, face masks. She has a cameo role in Disney’s film Coco. And the biggest sign that she’s made it in the U.S.A.? Her own Barbie doll.

We really have evolved from the days when most people knew Frida only as the woman with the unibrow. She is one of those artists who never got to see how famous she would become. And one who might be as popular for the way she lived as the way she painted.

Let’s start with her life. There is too much to tell in a post, so I’ll focus on the events that directly impacted her art. Magdalena Carmen Frida Kahlo y Calderon was born in 1907 in La Casa AzuI (The Blue House) in Mexico City, three years before the ten-year Mexican Revolution. Frida lived most of her life in The Blue House. Her father, Guillermo Kahlo, was born in Germany. He was a well-known architectural photographer; you’ll see his 1932 photo of Frida. 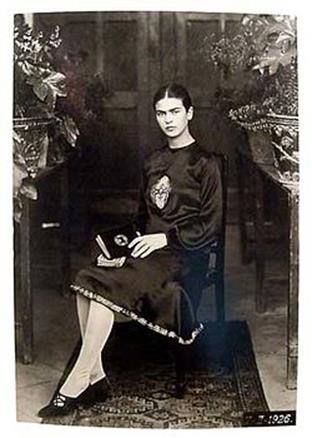 Frida had a hard life. She was stricken by polio at age six, resulting in a foot twisted outwards and one leg shorter and thinner than the other. When she was eighteen, a streetcar ran into the bus she was riding. The metal bannister impaled her through the hip, fracturing her pelvis. She also fractured her collarbone, ribs in two places, spine in three, and leg in eleven. Her shoulder and foot were dislocated. From that day her life would be filled with health problems, chronic pain, and surgeries.  Frida at 19.

It was while she was immobilized and bedridden for three months that she started painting using a special easel made by her mother. Her interests turned from medical school to art. Four years later she married Diego Rivera*, the famed muralist. 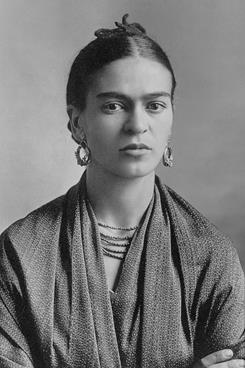 They moved to San Francisco in 1930, then Detroit, and back to Mexico in 1934. She had her first solo exhibition in New York in 1938, making a splash when she arrived in a colorful Mexican dress. The next year she became the first Mexican artist in the Louvre’s collection. She had prominent fans, but she was treated with condescension by others. Many only acknowledged her as Diego’s wife. She divorced Diego ten years later, for a year. Both had many affairs during the marriage. 1932 photo by Guillermo Kahlo.

She had 32 surgeries over the years, and in 1953 her right leg was amputated. That year she had her first solo show in Mexico. She was supposed to stay in bed, so she had her bed moved to the gallery for the show’s opening reception, arrived by ambulance, and greeted guests from bed. She died at the Blue House the next year, 1954, at age 47.

Frida called herself a realist painter, but her art often included elements of fantasy. Many of her paintings were portraits and self-portraits, often documenting her pain and losses. She painted The Two Fridas following her divorce in 1939.  Under a turbulent sky, she sits beside herself in a European-style dress on the left and Mexican clothes on the right, perhaps referencing her mixed heritage. 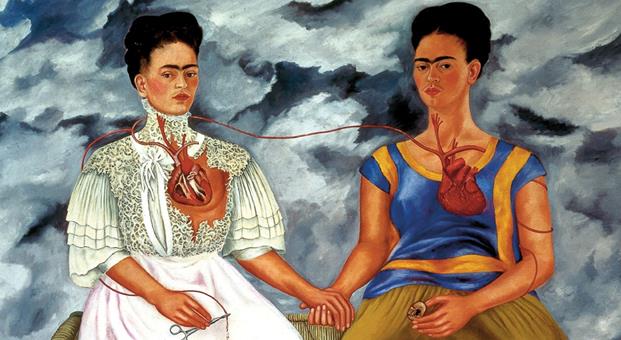 They are connected by a blood vessel that winds from exposed hearts to hands. Mexican Frida’s heart is healthy; she holds a locket containing an image of Diego.  European Frida’s heart  and artery are cut open; perhaps a broken heart without Diego. The two Fridas, holding hands, connect her two personalities: one of health and the other of illness.  Image courtesy of Museo de Arte Moderno, mam.inba.gob.mx, without charge.

Some paintings include nature, like Self Portrait with Thorn Necklace and Hummingbird from 1940. 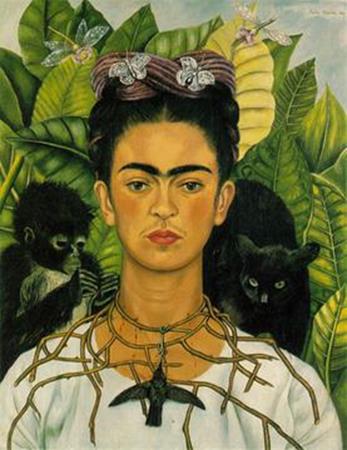 By Source (WP:NFCC#4), Fair use, https://en.wikipedia.org/w/index.php?curid=3518151
But many others graphically depict wounds, blood, a failed abortion, and a miscarriage that endangered her life. Not for the squeamish. In The Broken Column, painted after a spinal surgery in 1944, her naked torso is split open, supported by a brace that she wore. A stone column broken in many places replaces her spine. She stares at us with a determined look while tears stream from her eyes. The 1946 painting, The Wounded Deer, depicts her wounded body. 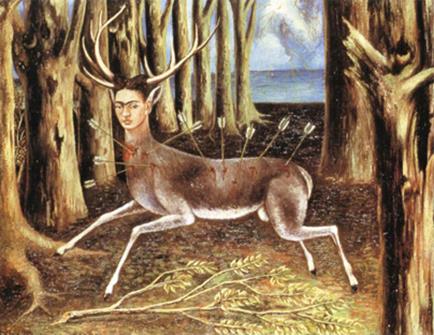 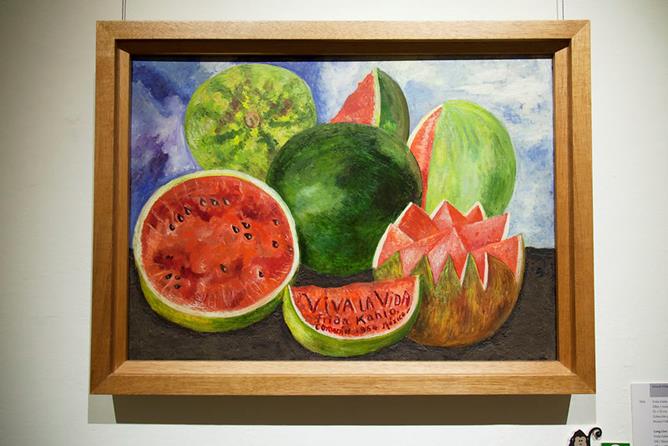 It is a celebration of life as hers is about to end.  Yet, in those days she talked about death and wrote, “I joyfully await the exit — and I hope never to return.”

After her death, Frida became regarded as one of the most significant artists of the last century. But it is her lifestyle and story that has made her an icon around issues like nonconformity, feminism, Mexican identity, and LGBTQ. She had every reason to play the victim, but to many, she is a hero. Her image is recognized everywhere, even by people who have never seen her art. In 2001 she became the first Hispanic woman on a U.S. postage stamp.

I visited The Blue House many years ago, when it seemed like Frida was only known in the U.S. by art historians. I want to visit again, this time to see her house and her art through the eyes of all those she has touched around the world.

*We’ll learn about Diego Rivera in a future post.

2 thoughts on “Everybody Loves Frida”