O’Keeffe first visited New Mexico in 1917. In 1929 she returned with an artist friend; they stayed and had studios in the Taos home of arts patron Mabel Dodge Luhan. The British writer D.H. Lawrence bought a ranch from Dodge Luhan five years earlier. When O’Keeffe visited the ranch, she often lay on a bench in front of the house, looking up through the big pine tree to see the stars. She captured that view in The Lawrence Tree. 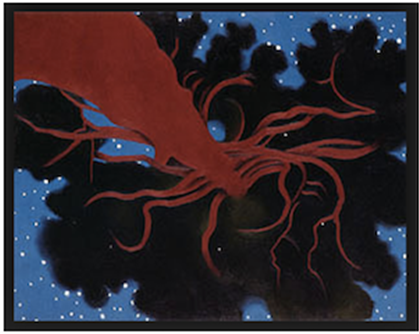 From Albuquerque, New Mexico, drive north to Espanola. Then take NM Road 68, paralleling the Rio Grande River for forty miles to the village of Ranchos de Taos. When you pull off toward the town plaza, you’ll see the massive adobe San Francisco de Asis Mission Church. Built between 1772 and 1816 on land that was part of New Spain, the church is a historic treasure. And it has been described as one of the most photographed and painted churches in the world. The front of the adobe church is impressive, flanked by two bell towers and monumental buttresses. The inside has a wood beamed ceiling, a colorful altarpiece, and an intriguing “Mystery Painting.”

The bigger draw of this church reveals itself when you walk around back. You’ll instantly see the view in O’Keeffe’s 1930 painting, Rancho Church. (See it here on The Met’s website.) Through Georgia’s eyes, you’ll see the massive yet simple structure framed by a complementary sky. Even if this were not a church, the scene would have a spiritual quality, perhaps coming from the harmonious blend of elements made by nature and by man. 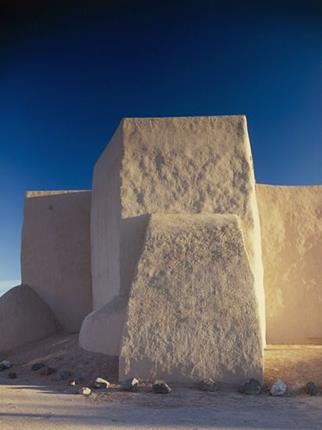 The view in this photo is wonderful enough, but O’Keeffe makes the walls look even more organic, and as though they have a life of their own.  If Georgia had not seen and recorded this church on canvas, I probably would have gone right by, barely noticing it when I drove up NM-68. I certainly would not have stopped to take in its beauty. If I did, would I have gone to its back? By sharing her view, Georgia created a richer experience for us when we see the church.  And of course we should also credit the villagers who built it and maintain it 200 years later.

O’Keeffe fell in love with New Mexico as “…a beautiful, untouched lonely feeling place, such a fine part of what I call the Faraway.” She spent part of each year in northern New Mexico. She would explore, driving her Model A into the high desert hills to collect rocks and bones, finding inspiration in the expansive skies, colored rock formations, sun-bleached animal skulls, and piercingly bright sunlight. 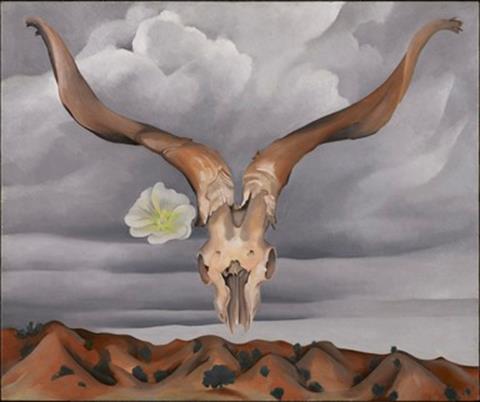 In 1940, she bought a summer house on twelve acres bordering Ghost Ranch. In 1945, she bought a second place in Abiquiú (current population 151). The abandoned 5,000 square foot compound with some rooms built in the 1700’s and huge windows in the main house became her home and studio. After Stieglitz died in 1946, she began living in New Mexico full time.

As much as she liked the solitude she could find on her ranch and in Abiquiú, she did not check out of society. She was a popular artist on the world stage, receiving commissions and being exhibited in many places. In 1946 she was the first woman artist to have a retrospective at MoMA. And the huge 1965 Sky above Clouds IV at the Art Institute of Chicago came from looking out the window of an airplane during her world travels. Guests at her ranch ranged from Charles Lindbergh to Allen Ginsberg, Ansel Adams to Joni Mitchell. In 1976, her autobiography was a best seller. She received the Presidential Medal of Freedom in 1977.

She lived alone on her ranch until 1973 when she hired Juan Hamilton to be her live-in assistant. I was often tempted to drive up to her house to meet her. But she was rumored to run people off her property with a shotgun. I decided I didn’t want to be famous for being shot by an artist who was famous. When an Albuquerque art supply store was closing after 67 years, the owner reminisced with a newspaper reporter. First he mentioned a well-known artist who was a good customer, then remembered “the nasty woman. You’ve seen those sourpuss pictures of her? Well, her personality was the same.”

Her eyesight failed her in the 1970’s. She used her peripheral vision to work with watercolor and charcoal and used assistants for grander works in oil. When she died in 1986 at the age of 98, she left most of her $65 million estate to Juan. She had no children, but a sister and a niece contested the will, asserting Juan had unduly influenced her when she was sick, blind, and deaf. An amicable settlement transferred 42 paintings and her home to a new foundation, 36 paintings to various museums, about ten percent of the estate to Juan (including twenty-four paintings and the ranch), and thirteen paintings and about $785,000 in cash to the family. In 1997, the foundation opened the Georgia O’Keeffe Museum in Santa Fe to offer a comprehensive history of her life and work.

In 2014 Jimson Weed/White Flower No. 1 sold for $44.4 million to an anonymous buyer, tripling the previous record for a work by a woman artist sold at auction. In a stunning act of deaccession, the Museum was the seller. It sold its most valuable painting so it could buy other works in the future to fill gaps in its collection. The anonymous buyer turned out to be Alice Walton, the Walmart heiress, for her Crystal Bridges museum.

Georgia’s home at Ghost Ranch is not open to the public, but her home and studio in Abiquiú are. In a future post, we will visit her home and the museum.