Last week in The Original Olympians we talked about the prominence of mythology in art history. We began a look at five exceptional artworks featuring Greek gods and goddesses, ending with awarding the bronze medal to Winged Victory. Now it is time to award the next two medals.

Our silver medalist resides in the Gallerie degli Uffizi in Florence, Italy. Its subject resides on a scallop shell.

When I visited the Uffizi, I thought I had been in all the rooms, but hadn’t seen the Botticellis. I had to use my Italian to ask a janitor where they were…and there she was, Venus in all her glory. Standing in front of the iconic 500-year-old painting that I knew since childhood was a thrill. Renaissance artist Sandro Botticelli finished The Birth of Venus around 1485, painting it with tempera
on canvas. At that time it was more common to paint on panels. The colors are still striking even though the greens have darkened while the blues have lightened over time. It is large, about 5 ½ feet by 9 feet, so first I stood back to take in all in, then moved closer to see the details as I walked from left to right. 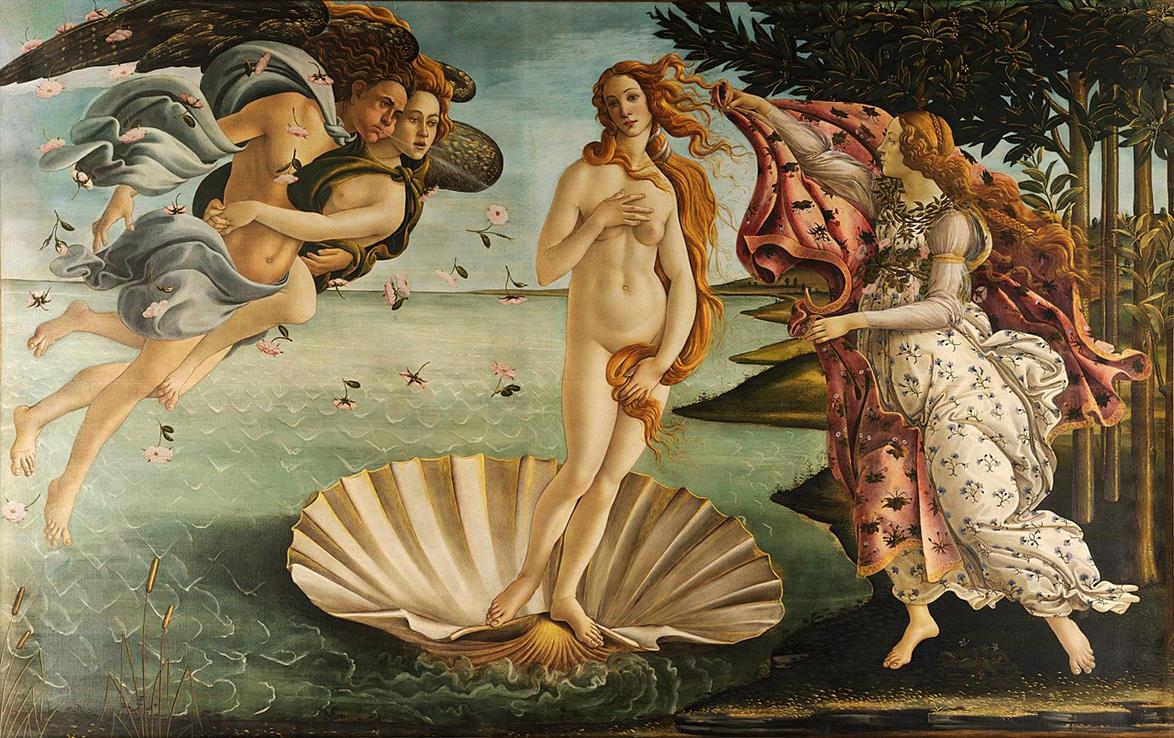 Venus is the Roman name of the Greek goddess Aphrodite. She is the goddess of love, beauty, pleasure, sexuality, etc., so it is no wonder that she is usually depicted nude. And her Greek name is the root for the word “aphrodisiac.” She was born from sea foam, and her claim to fame is that she was born fully formed. So, Botticelli shows her arriving on the island of Cyprus riding a huge scallop shell. (Perhaps she should be the goddess of surfers.) She modestly covers herself with her long blond hair.

To her left, Zephyr, the winged god of wind, carries a winged nymph. Together they blow Venus to shore.  Leaving nothing to chance, Botticelli painted lines from their mouths so we can see they are creating the wind. Their wind blows through her hair and over to the figure on the right.  She meets Venus, ready to clothe her. Zephyr’s wind blows through the flowered cloak and the figure’s hair.

Only with a closer look do we see that Venus’s pose is improbable, her weight centered farther to the left than her foot. Maybe Botticelli did that to show the force of the wind blowing her to shore. Fine details like the fabric patterns and the airborne roses, the artist’s color choices, and his mastery of painting faces combine to make a beautiful artwork. Surely, Venus, the goddess of love, is happy that so many have fallen for this painting.

And the gold medal goes to Laocoön and His Sons. The Greek statue group is believed to have been made around 40 B.C. It was found on a hill in Rome in 1506, and has been on display in the Vatican ever since. Imagine the excitement when the sculpture was recognized as a masterpiece referenced in Greek writings. It stands 6 ½ feet tall, so large that when you step up to it, you are drawn into the drama: the agony experienced by Laocoön and his two sons as they suffer the attack of two sea serpents. 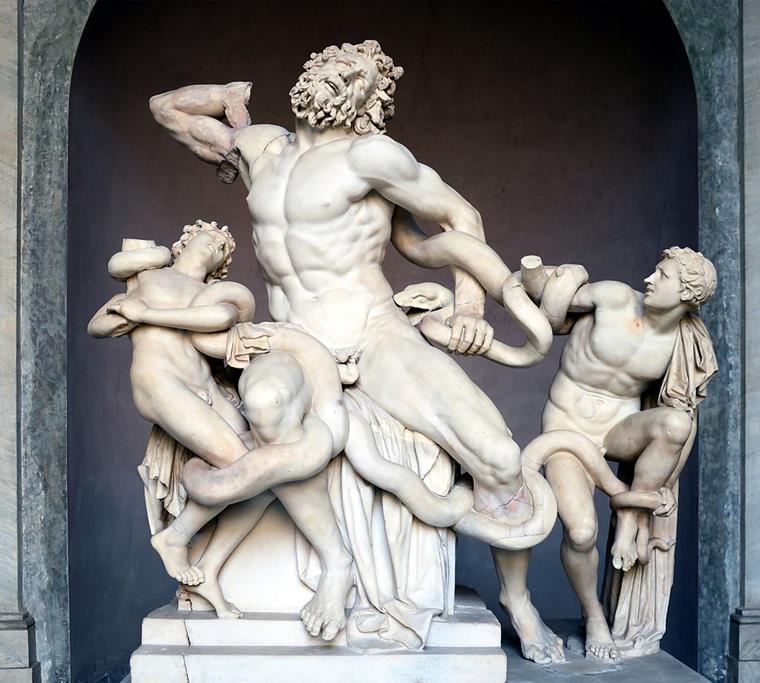 Laocoön was the subject of many Greek writers and the serpent story has many variations. If we follow the story told in Virgil’s Aeneid, Laocoön was a Trojan priest of Poseidon, the Greek god of water and the sea, known to the Romans as Neptune. He tried to expose the trick of the Trojan Horse and warn his fellow citizens. Poseidon and Athena, who were on the side of the Greeks, sent two sea serpents to strangle and kill him and his two sons. 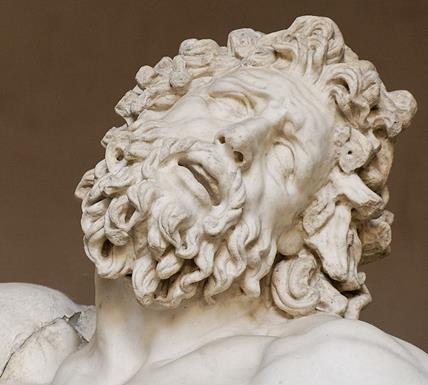 Like Winged Victory, many parts of the statue broke off. Some were reattached, but parts of three arms didn’t make it. Even with missing parts, we see the victims struggling, their faces expressing horror and hopelessness. The son on the left appears to have died from venomous bites, the son on the right struggles to get free, and the father tries to keep a serpent from biting his hip. But we know there is no escape. Seeing father and sons having to watch each other suffer this fate makes the scene especially poignant.

It is difficult to follow the wrapping bodies of the serpents when seeing the statue in person. So, imagine the challenge the sculptor faced when designing the statue. The skill he used to carry out that design in stone is amazing. For his ability to use marble, usually applied to stoic and noble poses, to convincingly bring to life a nightmarish scene, he wins the gold.

The Olympics are off to a good start. I knew I would see amazing Opening Ceremonies, but was not expecting to see a robot make free throws and a three-pointer during the USA-France basketball half time. Feeling the Olympic spirit, next week we will look at artworks featuring sports.

1 thought on “Silver and Gold”