In the first week of the Tokyo 2020 Olympiad, there were dramatic moments on the tracks and off the mats. I got a kick out of the men’s triathlon from start to finish. First, a media boat blocked half the swimmers when the starter’s gun went off. The other swimmers who dove in and started swimming had to come back for a fresh start.

Then in the running portion near the end of the race, Great Britain’s Yee was in the lead and setting the pace; we waited for him to put it in high gear in the final lap to claim the gold. Instead Norway’s Blummenfelt hit the gas, and no one could catch him. In the last stretch, he looked back again and again. Seeing how far back Yee was, he put his hands to his head each time, shaking it in disbelief as he ran to the finish line. The surprise on his face was the highlight of the race.

In other events, I marveled at what athletes can do with their bodies. The gymnastics routines amaze me with soaring heights and flips. And when I remember my own experiences on the pommel horse, how difficult it was just to “walk” around the horse on my hands, even the less exciting routines are incredible.

But when I watched synchronized diving, I was enthralled, seeing art as much as sport. Which made me think of artworks about sports. So here are three:

The discus throw has been around for a very long time, portrayed in a classical Greek sculpture around 460 B.C. and still an Olympic event. It requires strength and balance as the thrower rapidly spins and releases the discus to send it flying out as far possible. The Olympic record is held by Martina Hellman at over 237 feet.

The Discobolus of Myron was a Greek bronze. Unfortunately, that original sculpture is lost, but it was copied many times by Roman artists in marble and bronze. Here are two Roman versions made in the first two centuries A.D. (Go ahead, compare and contrast.) 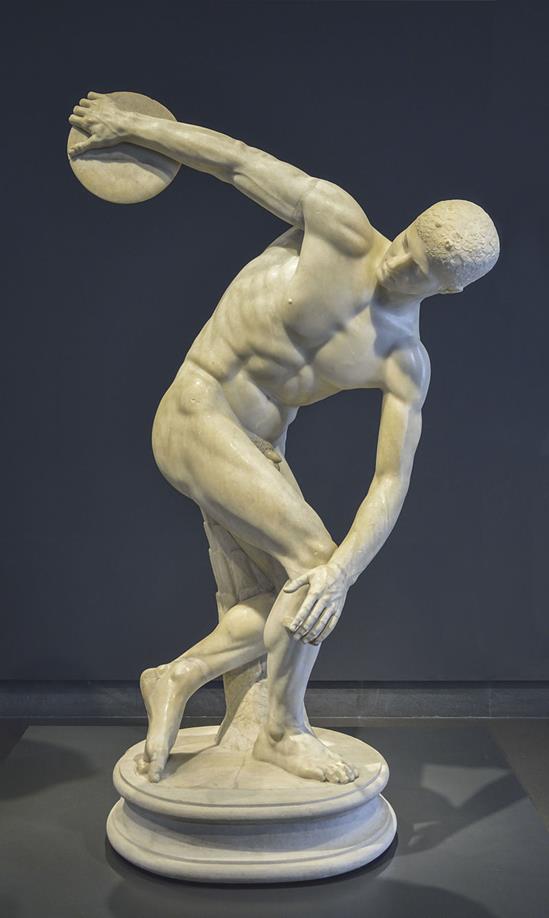 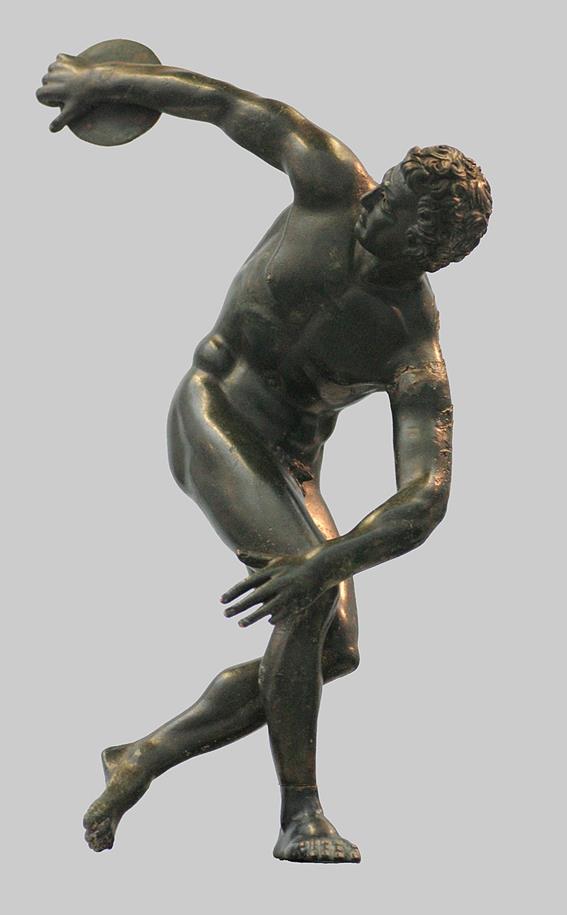 Although the pose may not accurately show an actual position of a  thrower, it sure does capture the athlete’s strength and spinning motion. By freezing the moment he is about to release the disc, we also see balance and even grace. If we removed the discus, we might think it is a balletic pose. As we discussed in our first post, What is Art?, the Ancient Greeks strived for perfection in everything, so statues portrayed ideal human bodies with perfect proportions.

Norman Rockwell was an American painter and illustrator born in 1894 in New York City. His first art instruction was at the Chase Art School when he was 14. Even as he continued his art education, his works appeared in several publications, leading to a job at the Boy Scouts publication, Boy’s Life.

After moving to New Rochelle, he submitted a painting for the cover of The Saturday Evening Post that was published for Mother’s Day in 1916. He would go on to publish 323 Post covers over 47 years.

So many of his paintings are iconic, like Freedom from Want, the Thanksgiving table scene from his Four Freedoms series, and Rosie the Riveter. For our post, let’s look at Choosin’ Up from 1951, one of his baseball-themed paintings and part of his “Sporting Boys” series. 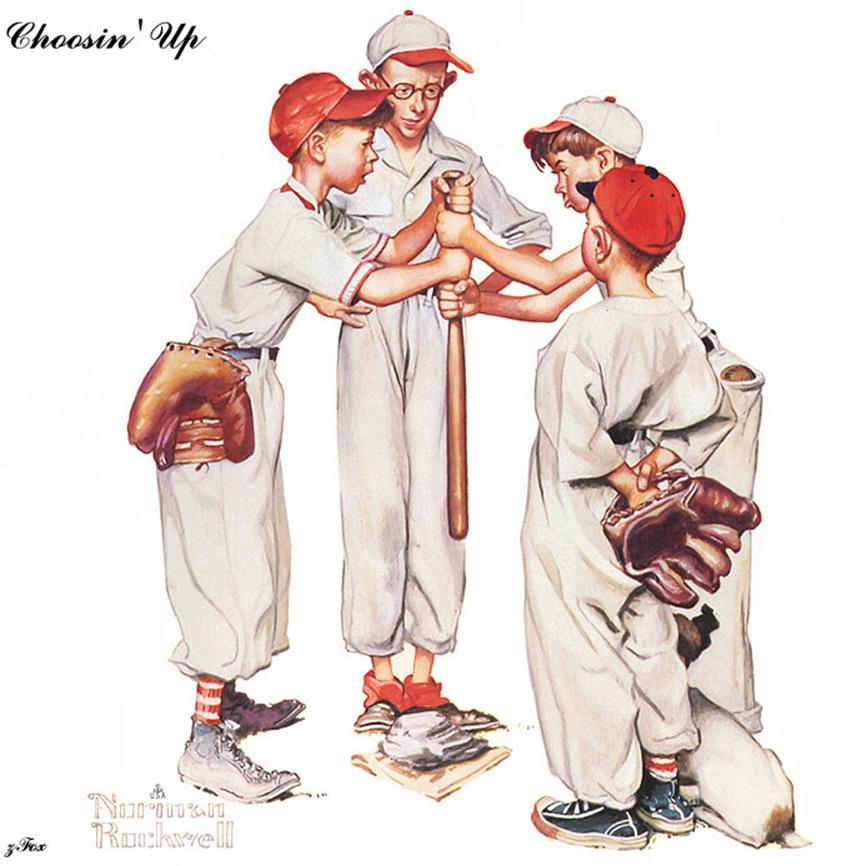 We see four boys walking their hands up the bat to see who ends up on top, determining which team bats first. I remember doing this, but seeing these boys do it makes me laugh: the oversized uniforms, the tall boy with glasses who thinks he’s in charge, the unhappy look on the loser, the little brother in front…and of course the dog has to watch too.

His paintings can be funny, relatable, and poignant in capturing scenes of American culture. They were contemporary when first published, but now they show us or remind us of simpler times. He has critics who don’t consider him a “serious” artist. It was only when I saw his show at the Guggenheim back in 2002 that I realized he also powerfully addressed social justice issues like racism. Given his significant contributions to American art and history, we will dedicate a future post to him.

When I think of art about sports, the first artist that comes to mind is LeRoy Neiman, an American expressionist artist who lived from 1921 to 2012. His art skills were discovered when he was in the Army. After that, he studied at the St. Paul School of Art and the Art Institute of Chicago, where he taught for ten years. He became an artistic contributor to Playboy magazine, then traveled widely and painted at major sporting events like the Olympics, The Ryder Cup, Wimbledon, The Masters, the Super Bowl, the World Series, and the Kentucky Derby. 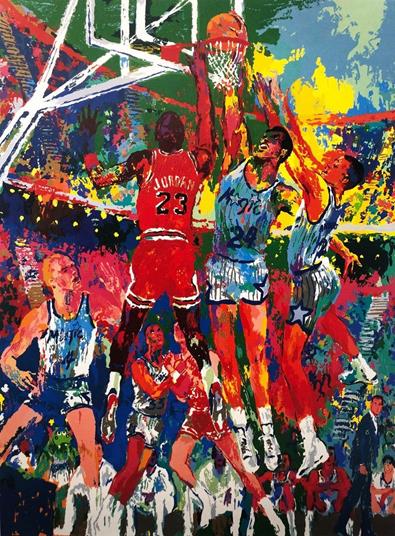 Neiman is known for brightly colored, energetic paintings and prints of sports, athletes, and musicians, like this painting commissioned by the NBA’s Orlando Magic in 1989 for its inaugural season. It would be reproduced in serigraphs (screen prints) sold to benefit the Orlando Magic Foundation.

His paintings sold for as much as $500,000. Every year he would release six new serigraphs that could bring in $10 million. His works are shown in prestigious museums, while being criticized by some as being “commercial.” He responded with his view that commerce rules the art world.

Most sports we play and watch determine winners by objective measures, like who scored the most baskets or goals, who crossed the finish line first, or who went the longest distance. But the Olympics get us to watch sports we would not normally watch. So we see events in which athletes are judged by their style, balance, precision, and creativity.

The Games remind us that even in sports, there is artistry.

1 thought on “The Art of Sports”