In the last twenty-five posts, we looked at many beautiful artworks, making it easy to imagine artmaking as a rewarding experience for artists and experiencing art a joy for us. But sometimes art hurts; sometimes it even kills.

Art supplies and materials have sickened artists and led to premature death. Long-term exposure to toxins is the price many artists pay to create. For example, there is speculation that Michelangelo, Goya, and Van Gogh suffered from lead poisoning, based upon their descriptions of symptoms like stomach pain and nerve damage. Caravaggio‘s bones show high levels of lead. Printmaking with lead pigments, like chrome yellow, and acids for etching also exposed artists to danger. 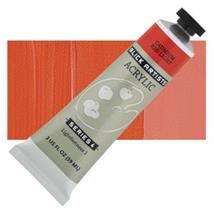 A more recent example is cadmium in paints. Since the early 1800’s, this heavy metal has punched up the vibrancy of colors and prevented them from fading when exposed to the sun. But cadmium can cause respiratory, kidney, and liver damage when inhaled or ingested. (I hope the rumors that Van Gogh licked his brushes are not true.) Nowadays, some companies offer cadmium-free paints, but you can still buy Cadmium Red with cadmium and barium.

If the pigments don’t harm you, the solvents might. Vapors inhaled while mixing and thinning oils, inks, and varnishes, and when cleaning brushes, plates, rollers, and hands, along with absorption through the skin, can be harmful.

Even in our lifetimes, there are many examples of products that were widely used for a long time until it was discovered they are hazardous, like lead-based paints and asbestos in homes and certain herbicides. But awareness of these dangers leads to changes, like low VOC paints and carpets, and printmaking shops like New Grounds in Albuquerque, New Mexico, that use non-toxic methods. 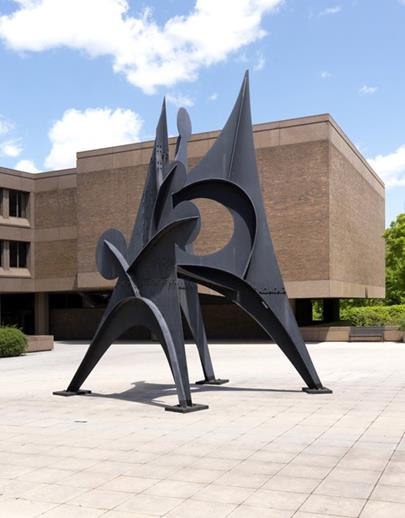 Alexander Calder is known for sculptures, kinetic (mobiles) and stationary. When his painted steel work, Five Disks: One Empty was being installed by a crane at Princeton University in 1970, a cable snapped and the jib instantly killed two workers, crushing the skull of one and pinning the other to the sculpture for three hours. A third worker was also hit on the head. The crane was rated to lift less than three tons, no match for the four-and-a-half ton artwork. Five Disks: One Empty by Alexander Calder, The John B. Putnam Jr. Memorial Collection, Princeton University, www.artmuseum.princeton.edu

Richard Serra’s Sculpture No. 3 was being installed at Minneapolis’s Walker Art Center in 1971. It consisted of two five ton steel plates balanced against each other. When a safety slot on the floor failed, a plate fell and crushed one of the installers.  Then in 1988, two SoHo gallery workers were hurt when a sixteen-ton Serra sculpture fell over, pinning them and knocking out two load-bearing columns in the building.  Que será, Serra?

Husband and wife team Christo and Jeanne-Claude created many memorable environmental artworks, from wrapping Australian coasts and Miami islands in fabric to installing 7,503 fabric panels on rectangular gates in Central Park. In 1991, they erected 3,100 six-foot-tall umbrellas on two coasts: yellow in California and blue in Japan. 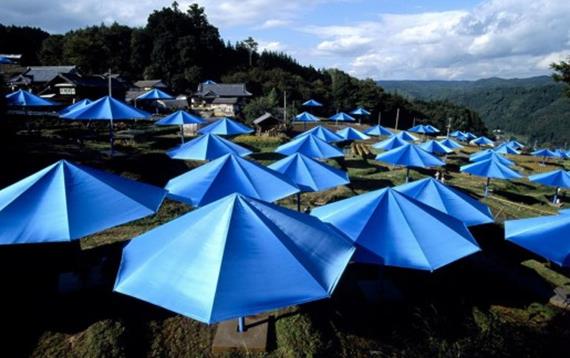 But even this peaceful connection between the two countries turned deadly. When an umbrella broke free of its socket, a California woman was crushed against a boulder. To avert any other tragedies, Christo had the umbrellas removed. Unfortunately, during the dismantling in Japan, the arm of a crane hit a power line, electrocuting the operator.

Luis Jiménez created fiberglass sculptures with vivid, sometimes garish, colors. Most showed some aspect of Hispanic culture, from Aztec warriors to fiesta dancers. His works are displayed from the University of New Mexico campus to the Smithsonian. He made the sculptures by pouring liquid fiberglass into a mold, then airbrushing as many as six colors onto each area, sometimes adding metallic flakes for a dazzling, glittery effect. While he was working on a thirty-two foot sculpture, Blue Mustang, a big section came loose from its hoist. It pinned Jimenez to a beam, severing an artery in his leg. He bled out on his studio floor, the ultimate sacrifice for his art.

The sculpture was completed by friends and staff and installed in 2008, sixteen years after it was commissioned. It greets you as you approach the Denver airport. With its scary, red lit eyes, it is no wonder the locals have nicknamed it “Blucifer.”

Our last artwork is part of a redevelopment project in Manhattan’s Hudson Yards. Okay, that doesn’t sound exciting. But when I saw a photo of it on Instagram, I thought was a very cool copper sculpture. Then I noticed there were people walking in it; it is huge. Sixteen stories tall, 154 flights of stairs (that’s a mile!), eighty landings, and a $200 million price tag. After two years of construction, Vessel opened to visitors in March 2019 and was an instant hit, and not only with those trying to get in their 10,000 steps. 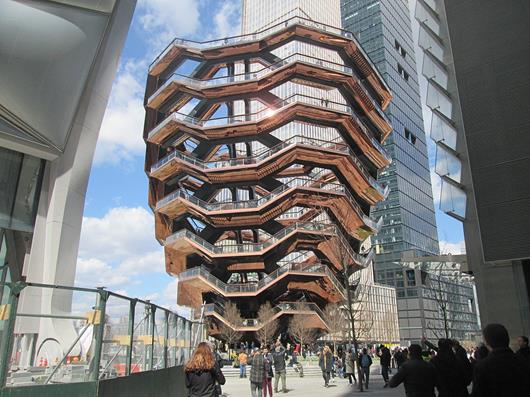 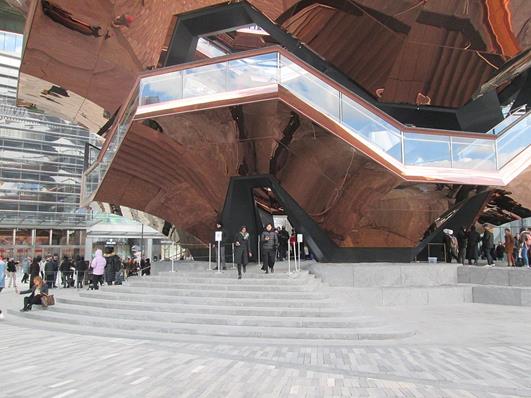 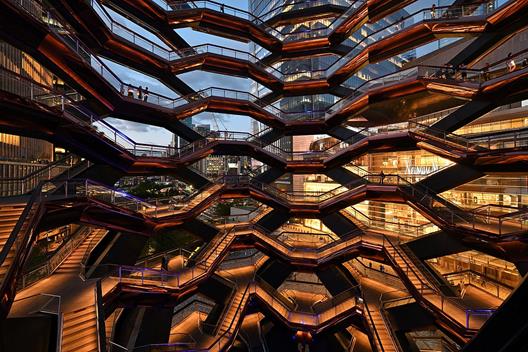 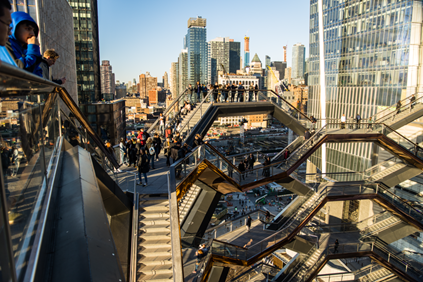 But it didn’t take long for it to take an ominous turn. In February 2020, a young man bought a ticket, walked up to the sixth floor…and jumped to his death. In December 2020, a young woman jumped from the top. In January of this year, a third person jumped. Vessel closed for about five months while the owners considered how to discourage more suicides. With a new policy of not letting anyone visit alone, Vessel reopened at the end of May. Tragically, just two weeks ago, a 14-year-old boy jumped to his death while with his family. Vessel was closed and may never open again.