The art world lost a significant figure last week when Chuck Close died in Oceanside, New York. The first time I saw Chuck was in 2008 at the Colony Theater on Lincoln Road in Miami’s South Beach. He was accompanying Herb and Dorothy Vogel at the screening of a documentary about the collector couple (whom we’ll meet in a future post.) While it wasn’t a significant conversation (he only asked if it was OK if he sat in front of me), it was still fun to at least exchange pleasantries. I would cross paths with him on Collins Avenue a couple years later. 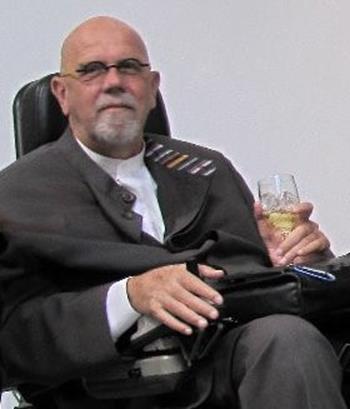 Chuck was born in Monroe, Washington, in 1940. He began his artistic journey at a young age; at 14, he already had old paintings. After graduating with high honors at the University of Washington, he got his Master of Fine Arts degree (MFA) at Yale. On a Fulbright grant, he studied in Vienna, then taught at the University of Massachusetts. His work in art school was abstract expressionist. Then he embraced another style.

Chuck said he had face blindness, a fascinating malady that ties into the painting subject he is most known for: the human face.

What is Face Blindness?

Humans have an amazing ability to recognize faces. To do this, we take into account the whole face, not individual features. There is an area in the occipito-temporal lobe of the brain that performs this function. Face blindness (prosopagnosia) is a cognitive disorder that makes it difficult or impossible to recognize faces. It can be congenital or acquired from brain damage. Hard as this is to imagine, with one form of face blindness, if you were shown two faces, you would not be able to tell them apart. In another form, you could tell two faces apart, but they would not look familiar the next time you saw them. Imagine not being able to recognize your spouse or even your own face. You might say it is the facial version of Groundhog Day; it throws the saying, “You only get one chance to make a first impression,” out the window. So how do people with face blindness recognize others? By relying on other attributes like voice, body size and shape, and hair color.

In 1988, Chuck felt pain in his chest as he was about to hand out an artist award. After his speech, he went across the street to a hospital where he had a seizure from a collapsed spinal artery that left him paralyzed from the neck down. With physical therapy, he regained limited movement of his arms and legs. But after what he called “The Event,” he used a wheelchair. He continued to paint by tying a brush to his wrist. Many believe his best work was done after The Event.

Let’s Break It Down 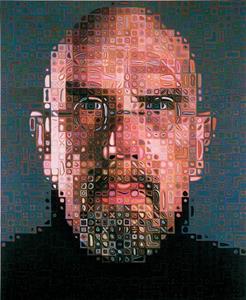 Those with face blindness can recognize elements of individual features, but they cannot process them as a whole face. Chuck Close said that his face blindness must have inspired him subconsciously to do portraits, that the portraits helped him to recognize people. In his new style, Chuck would take what, to him, was an overwhelmingly complex image and recreate it on his own terms. He often started with a photograph on which he would draw a grid. Then he would paint from the photograph, recreating the grid and copying each cell. The works started out to be photorealistic and in black and white. Pretty quickly, he moved to painting huge faces. Then he began using an airbrush to paint spots of color in each cell, maybe an orange ring on a blue background. By itself, a cell is meaningless, but from a distance, the subject’s face takes shape with amazing precision. Looking at a Chuck Close painting is a lot like looking at an Impressionist painting. To really experience it, you have to take it in from a distance, then get up close to the canvas to see the image dissolve into shapes and color, as though each cell is independent. Chuck Close, Self-Portrait, 2004-2005. ©2021 WALKER ART CENTER

Most of his paintings are portraits of friends, family, and artists. A rare exception features President Bill Clinton. He worked in many media and techniques, watercolor to pastels, etching to handmade paper. His body of work included photography and printmaking. 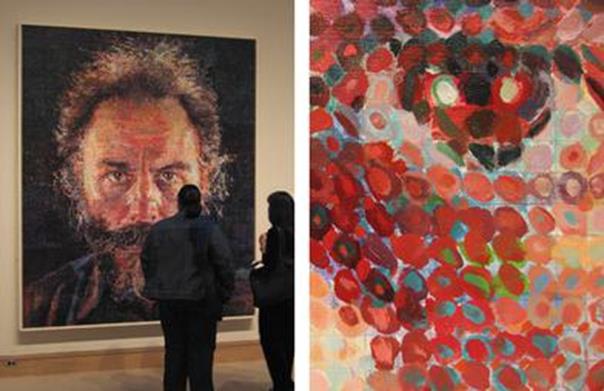 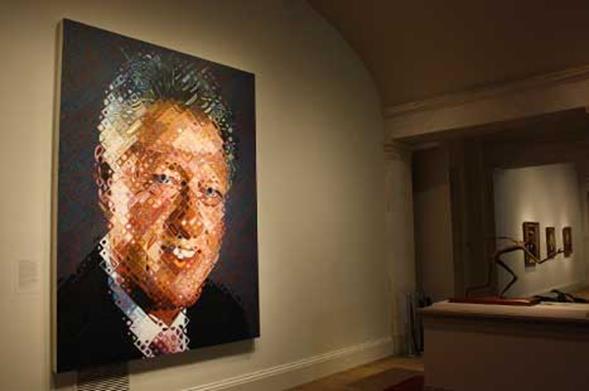 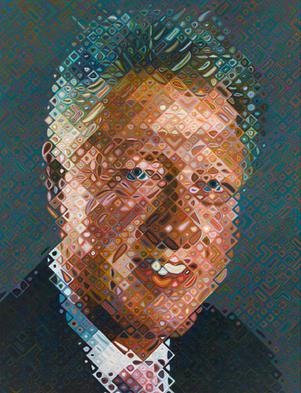 After his first painting sold in 1969, he was in almost one thousand solo and group shows around the world. He work was featured in the major international art exhibitions and the world’s most prestigious museums. In 2005, John was sold to the Broad Art Foundation (see Who Was Eli Broad) for $4.8 million. He is considered to have made a major contribution to 20th-century art.

Chuck had an active social life. He volunteered with national and community programs, from Presidential Committees to mentoring thirty-four middle school students. He was deeply involved in the art world: speaking engagements, attending openings and his exhibitions, and supporting other artists. When allegations of verbal sexual misconduct with models surfaced in 2017, some institutions broke ties with him. For example, the National Gallery of Art cancelled an upcoming show.

He was married twice and had two daughters. He died last week at the age of 81.

It’s easy to think of major artists as having lived centuries ago. But in our lifetimes, we could see Chuck Close and his latest work. I will remember watching his interviews; he always spoke with eloquence about art and humility about his role. I will remember the almost startling effect his paintings had on me as I walked toward the bigger-than-life faces. Because of those things, I won’t forget acknowledging each other with a smile as we passed on a Miami street.