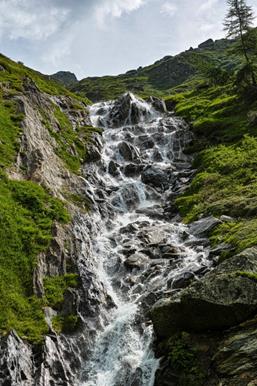 In our post “What Is Art?”
we said that it seems art has been made in every time and culture. Today let’s add “in every situation.” Art can be like water, flowing to find its place, filling in the crevices, always getting to the bottom of things.
Photo by Marian Kroell on Unsplash

Sometimes art leads, but often follows, reacting to the issues of the day. And so it is with art at the U.S.-Mexico border.

Anyone who waited in a border crossing line coming back from Tijuana, Nogales, Ciudad Juarez, or Nuevo Laredo knows that you couldn’t just waltz across the border even decades ago. There were barriers here and there, but it wasn’t until about 1993 when large-scale fencing of the almost-two-thousand mile border began. The first fourteen miles of fencing went up from the Otay Mesa crossing near San Diego to the sea. The Secure Fence Act of 2006 funded 700 more miles of barriers, but construction was paused in favor of a technology enabled virtual fence. By 2011, 649 miles had been fenced. Just this week, the Biden administration talked about restarting construction to fill in the gaps.

It Borders on Art

Long before President Trump’s rallying cry of “Build That Wall!” artists went to the border. But Trump brought more attention to the border, stirring up voters, pundits, and, yes, more artists. Here’s a look at the 4 Best Border Artworks, starting with one created ten years ago.

In 2011, Ana Teresa Fernandez approached the wall that divides a beach, wearing a black cocktail dress and high-heeled shoes. 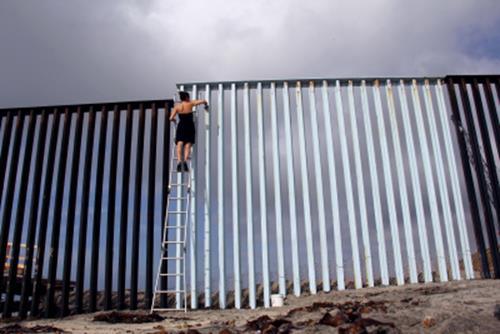 She set up a tall ladder and started to climb. But instead of carrying a dressy handbag, she held out a spray gun and began to paint the wall a pale blue to create “Borrando La Frontera,” which means “Erasing the Border.”  The best view is from a distance. Ana made part of the wall disappear, demonstrating the power of a simple act. 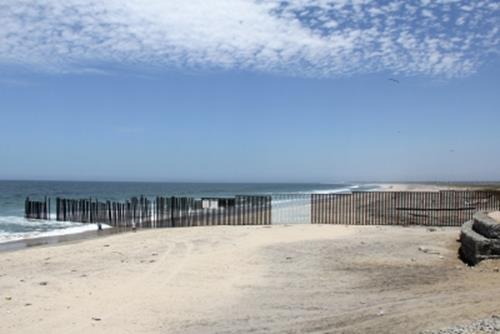 This photo shows the 2017 work of French photographer and street artist JR. He often works in areas where the residents have lost their individuality, their humanity, to political rhetoric. Everyone loves a picnic but it’s even more fun and more meaningful when the picnic table crosses the border. 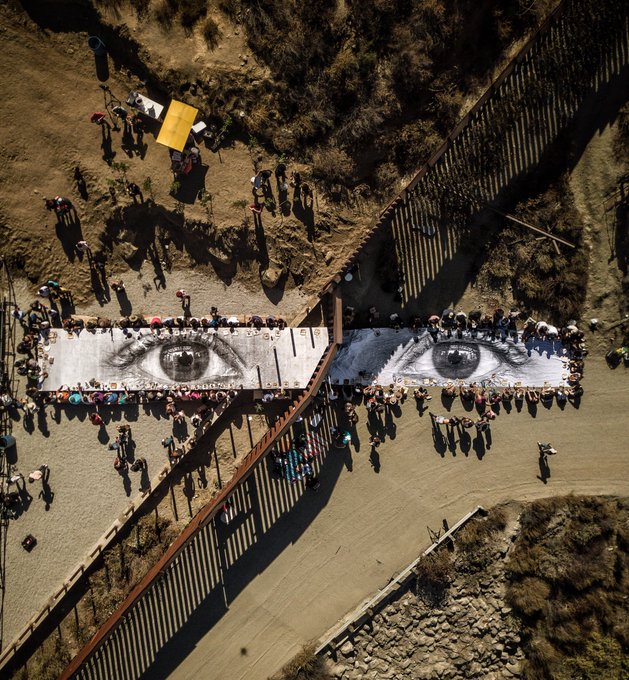 Food was passed through the fence, from the table on the Mexican side to a tarp on the U.S. side. From above, we see the imprinted eyes of a Dreamer, one on each side of the border. So what was the occasion? It was the last day of the installation of…

Most of JR’s work is only up for a short time, this one for about a month. Here he built scaffolding three times higher than the wall, with a huge photo of a one-year-old known as Kikito, who lives right by the wall in the town of Tecate. In a New Yorker article, JR recalled that when discussing using Kikito’s image, the child’s mother said “I hope this will help people see us differently than what they hear in the media, that they will stop taking us like criminals or rapists.” And “I hope in that image they won’t only see my kid. They will see us all.” Even though the scaffolding is angled and set well back from the fence, JR created the illusion on the U.S. side of a toddler peering over the fence. Kikito’s curiosity about what lies outside his crib truly makes him a dreamer.

The artworks we’ve looked at so far show the barrier the wall creates between people. The irony of the next border artwork is that it needs the wall to function.

“Teeter-Totter Wall” was created by two California art professors in 2019. One end is in Sunland Park, New Mexico; the other is in Ciudad Juarez.  “Kikito” was up for only a month; this work was up for only half an hour. But in our digital age, photos, video, and sharing on the internet can make a short time last forever.

Together, these four artworks show the simultaneous powers of political art to: 1) focus our attention on issues, and 2) pull us back from those very issues to show there are real people behind the rhetoric. The artworks also show the vision of the artists. They imagined something, knowing the effect it would have even before they start making it.