The most expensive Western artwork ever sold in Asia brought in $41.8 million on Wednesday. “Warrior” was painted in 1982 by Jean-Michel Basquiat.  He is the first artist featured in our blog because his work introduces a facet of contemporary art, raising questions like, “What does it mean?” 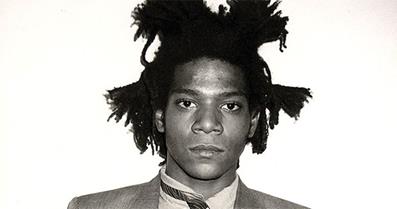 Photo by Andy Warhol, The Andy Warhol Foundation for the Visual Arts Inc.
First, some background. Jean was born in Brooklyn in 1960. He could read and write by age four, was a gifted artist, and fluent in three languages by age eleven. His home life was turbulent, leading him to try to live on the streets. As a teenager, he expressed himself through graffiti in Lower Manhattan when hip hop culture was developing. He and friend Al Diaz signed their work “SAMO,” as in “same old sh*t.” After a falling out, Jean made Al stop using the moniker. Jean’s work often included a three point crown and words and symbols that people liked even if they didn’t understand them. Sometimes his work consisted only of words, social commentary described as poetry. At a time when New York City was broke and crime ridden, SAMO gained anonymous notoriety across the city, even being the subject of an article in The Village Voice.

Jean is described by friends as charismatic and ambitious. He wanted to be a famous artist, and strategically promoted himself, like by becoming a regular on a public access TV show. He experimented with making art from whatever he could find during periods of couch surfing, including walls, floors, and clothing. Then he took his graffiti skills to canvas.

Let’s sample his painting by studying “Untitled” from 1982. Before reading on, take a good look at the photo below, taken from the Sotheby’s auction catalogue. Think about how it was made, what it shows, what it means, and how it makes you feel. I invite you to share your initial impressions in the Comments. 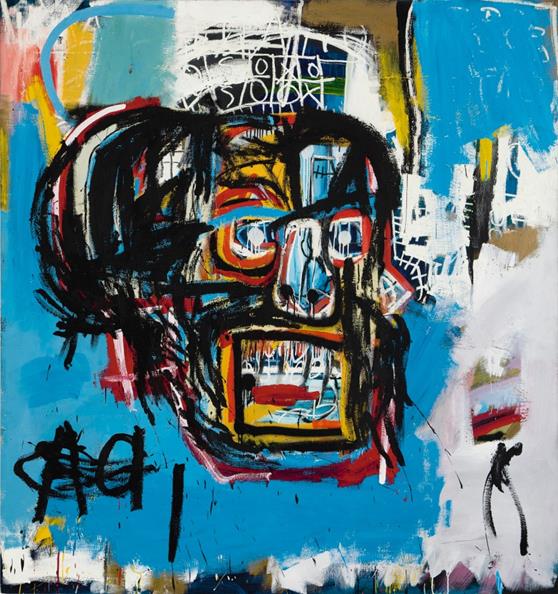 I expect the painting to be puzzling to most readers. So let’s break it down. It’s a 6-foot painting featuring a head, but unlike any I’d ever seen. There is no clear outline defining the shape that floats in an ambiguous space. Instead there are layers of colored lines, topped by crude, thick black lines. We see none of the perspective techniques mentioned in last week’s post, yet the skull has volume, with inset eyes and an open mouth showing us a cavernous space behind the teeth. But there is no illusion of depth in the light blue area surrounding the head.

I can imagine Basquiat frenetically applying acrylic paints, oil sticks, and spray paints to the canvas, the way he would have approached a wall as a graffiti artist, in a process of expression and creation. After he stepped away from the canvas, the image took on a life of its own. The head is in turmoil, aggressive and angry, expressing someone’s state of mind.  It is moving, pulsing, maybe even yelling out.

The three point crown sits atop the head, along with a crossed out tic-tac-toe grid, a counterpoint to the crossed out letter A’s (suggesting the first of a series?) at the lower left. These and other shapes and symbols make us wonder if he is using a language no one else has learned.  Sometimes Basquiat used words and letters in his graffiti and paintings for their shapes more than their meanings.

Basquiat’s painting of figures and symbols broke from abstraction. Within a year of finishing this painting, Basquiat had two solo shows and was invited to exhibit his work in documenta, its youngest artist ever. He was valued by the art world as something new: a young, non-White voice from the streets. He and Andy Warhol became friends and collaborators. Also that year, he dated an unknown who wanted to be famous too, Madonna, telling his friends she was going to be huge. He “made it,” even painting while wearing designer suits. During his meteoric rise, and maybe because of it, he went wild with cocaine. Sadly, he died of a heroin overdose in 1988 at the age of 27.

At first glance, the painting appears primitive, made mostly of thick lines and flat shapes of unmixed color. Yet those simple elements combine to create energy, intensity, and emotion. Though we may not know what to think about the painting, it does make us think.

To hear Basquiat’s own words and see him creating art, watch the 2010 documentary film “Jean-Michel Basquiat: The Radiant Child.”