Today’s story takes place over 500 years. It’s about a very old painting, its twisted provenance, disputes at every turn, and questions still unanswered. With characters including a famous Renaissance artist, Saudi princes, and a Russian oligarch, if you didn’t know today’s story is true, you might think it is out of a James Bond movie.

Leonardo da Vinci painted Salvator Mundi, Latin for Savior of the World, around the year 1500. The 26″ x 19″ oil painting on wood shows Jesus making the sign of the cross and blessing with his right hand while holding a glass orb in his left. The use of sfumato and the subject make the image other-worldly. One critic says looking at it is a moving experience, giving him a sense of peace. Looking into Christ’s eyes has the same effect on me as when I look into Mona Lisa‘s. 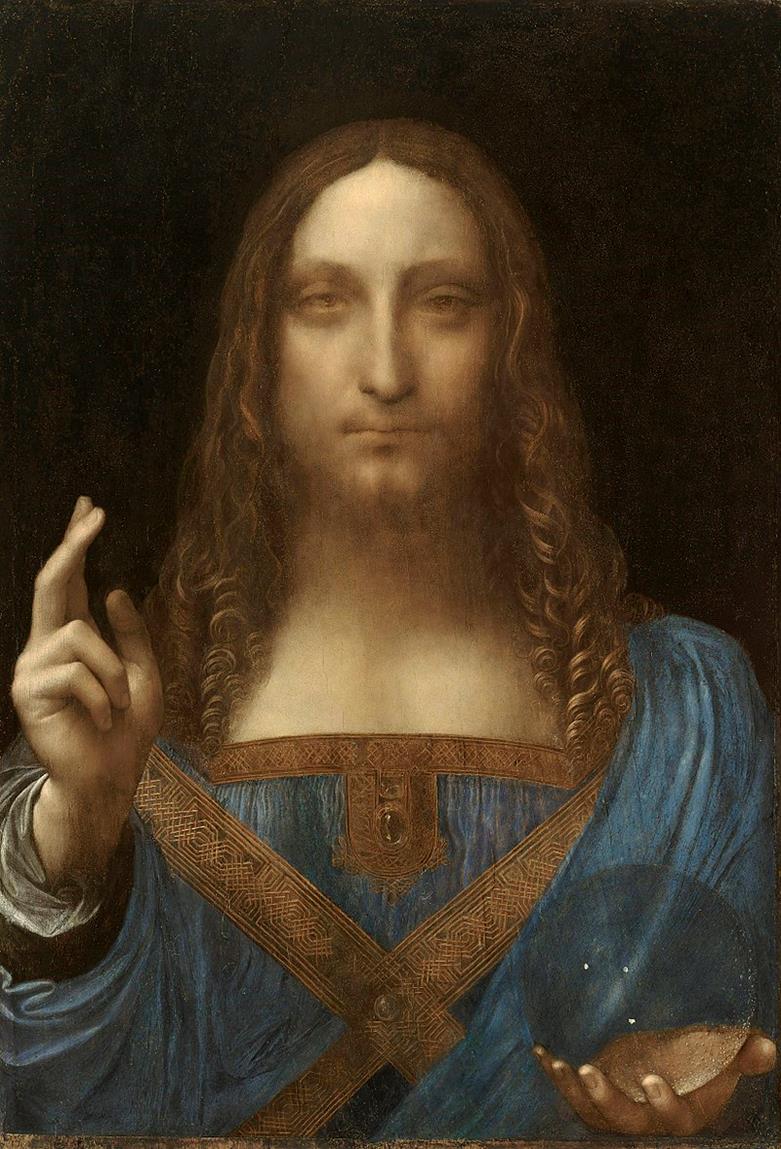 Art historians disagree on the exact dates of the painting, who commissioned it, and who has owned it. There is agreement that the painting was copied more than thirty times by Leonardo’s students. But the original’s provenance is sketchy from the start and has many gaps. Some scholars believed the original was lost or destroyed around 1603. Others say it showed up around 1640 in an English home whose owner was executed in 1649. Next it appeared in King Charles I’s royal collection; he was also executed in 1649. The royal collection was sold, but returned to the crown of Charles II in 1660. Then the painting surfaced at auction in 1763. It is believed the collector Francis Cook bought it in 1900.

A Cook descendent auctioned the painting off in 1958 for $58 to an unknown buyer. But at that point, the artist was believed to be Giovanni Boltraffio, a student of Leonardo.

The painting showed up next in 2005 when an American estate put it up for sale. It had been overpainted, making it seem to be a copy. A group of dealers thought the painting might be the original so they bought it for less than $10,000 and had it restored. Scholars studied the restored painting and decided it was done by Leonardo himself. They pointed to stylistic and technical elements Leonardo was known for, such as detail in the ringlets of hair and sfumato notable in the chin and neck areas. An x-ray of the painting showed the thumb was first painted in one position, then changed to the position we see, suggesting that the artist changed his mind. Scholars point out that a copier would have no reason to paint two positions of the thumb. The painting was shown as a Leonardo in the National Gallery in London in 2011.

In 2013, the dealer group sold the painting to art dealer and freeport tycoon Yves Bouvier for $83 million. Within months, he resold it to his client, Russian oligarch Dmitry Rybolovlev for $127.5 million plus a 2% broker’s commission. When Rybolovlev found out in the New York Times that Bouvier had only paid $75 million, he sued him in at least seven countries for fraud, claiming he was cheated to the tune of $1 billion across 38 artworks. Sotheby’s auction house was also sued for $380 million for helping Bouvier commit fraud. After dismissals in Monaco and Switzerland, Bouvier recently announced he is filing a $1 billion countersuit for damages to his business and reputation.

In 2017, Christie’s auction house announced the painting would be up for auction and displayed it in Hong Kong, London, San Francisco, and New York to more than 27,000 people. 4,500 people waited in line to see the painting on its final weekend in New York. On auction day, Christie’s sold it for $450,312,500! The winning bid of $400 million plus $50 million of fees made it the most expensive painting ever sold. Reaction to the breathtaking auction price was swift and widespread, mostly expressing the disbelief that anyone would pay that much for any painting.

The buyer was Saudi Arabian prince Badr bin Abdulla. The Wall Street Journal reported he bought it on behalf of Saudi Arabian crown prince Mohammed bin Salman, aka MBS. But Christies confirmed that Badr bought it on behalf of the Abu Dhabi Department of Culture and Tourism to be displayed at the Louvre’s new museum in Abu Dhabi in September 2018, but that never happened.

This tweet from a well-known art critic sums up the questions that linger over the painting and its price.

To any art-historians or restorers out there. Other than @ChristiesInc Salvatore Mundi – can you name any other *absolutely* top-tier Italian High-Renaissance masterpiece that had been mysteriously lost and then suddenly found in The United States? And placed at public auction? pic.twitter.com/EyTRTbiFZm

In 2019, a book about the painting titled The Last Leonardo was published. A year ago, we heard of work on a Broadway musical about the painting. Just two months ago a documentary was made called The Savior for Sale.

Safe to say, the end of this story has not yet been written.

* Recall from our blog post “4 Memorable Portraits” that Mona Lisa has its own room in the Louvre.

In future blog posts, we will learn how art auctions work at Christie’s and Sotheby’s, what freeports are, and the connection between art and money laundering.