Portraits have always been a big part of painting. Before the 1830’s portraiture was the way to record what someone looked like. But with the invention of the camera, photography took on that role. When we want a family portrait, we go to a studio, pose, and then decide how many wallet sized photos to order along with the large one. Nowadays, when someone’s portrait is painted, it is something special. But even back before cameras, having a portrait painted was special because it was only done for wealthy people who could afford to commission one. For many artists, even those who became famous for other types of painting, portrait commissions were their “bread and butter.” The artist shows his skill by making a painting that really looks like the subject. But that gets tricky when the subject is not very attractive because the more flattering the portrait, the more the subject likes it.

Here are 4 Memorable Portraits in art history, starting with a light-hearted look at:

On one of my visits to the French Quarter of New Orleans, I started the day with beignets at Café du Monde, then walked across the street to Jackson Square to visit St. Louis Cathedral. Next to the church, I found The Cabildo, where the Louisiana Purchase was signed and now part of the Louisiana State Museum system.


The museum featured an exhibit about the role in American history of the French king, Louis XIV. With the state of Louisiana named after him, we know it was a big one. It was an interesting historical exhibit, but the most memorable item was the huge 9′ x 6′ painting by Hyacinthe Rigaud on loan from the Louvre. Done in 1701, it is the official portrait of the “Sun King” who ruled France from 1643 to 1715. 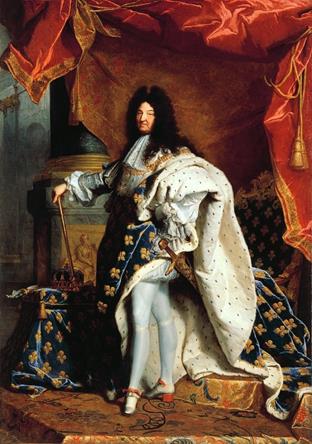 I knew that high society men in those days wore silk stockings and powdered wigs, but I never imagined a king would look like this, even in his coronation robes. The hairdo itself is a work of art and must have taken hours to arrange. Louis does not wear his crown; maybe it would have messed up his hair. His clothing is not off the rack; it is off the hook. Wow, the high heels. And showing off his silk stockings in a pose that might have inspired Marilyn Monroe. Queens have dressers and kings have valets, but Louis had a glam squad.

The Impressionists’ use of color, which we are used to now, was radical back then. Even the beautiful child’s face by Mary Cassatt we saw in an earlier post unsettled the public when they saw green and purple paint in it. 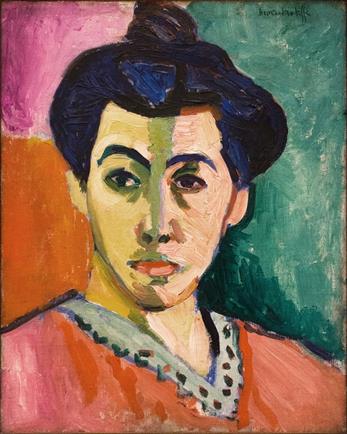 A few years after the Impressionist’s innovations, along comes Henri Matisse, who used color in even more radical ways.

He caused a stir with this 1905 portrait of his wife Amélie. Imagine the shock when people saw a green stripe on Amélie’s face, separating it into a yellow-green side and a flesh tone side, and surrounded by bold colors. The stripe divides the face into light and shadow. There is little detail in the facial features. Matisse is not realistically painting what he sees when he looks at her, but how he feels about her, aware of two aspects of her personality. He moves color from being descriptive to being expressive.

Gertrude Stein was a wealthy American author who moved to Paris in 1903. She and brother Leo collected avant-garde art. The Stein’s collecting and their friendships with artists helped establish them and create a market for their work, including one of her dear friends, the impoverished Pablo Picasso. Picasso began a portrait of Gertrude in 1905 at the tail end of his Rose Period. The process went on and on with starts, stops, and redoes as he tried to capture her realistically. (Gertrude said it took over more than eighty sittings.) At the last sitting he completely painted out her head and gave up trying to capture her likeness. After several months away, he finally finished the painting in 1906 without even seeing her. 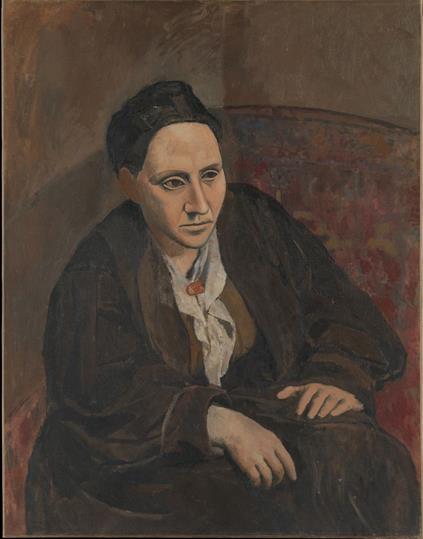 From the beginning this would not have been a traditional portrait. Her figure appears solid and bulky. The new face goes even further, looking like a stone mask, staring across the room with a timeless quality, reinforced by the muted colors. Soft features give way to  geometric shapes and sharper angles. Picasso believed he showed who she was more than what she looked like. When Gertrude saw the finished painting, she remarked that it was the only image that captured her.

When Gertrude’s friends saw the painting, they said it didn’t look like her. In a response that could not have been truer, Picasso said “It will.” For the many people who have never seen a photo of Gertrude Stein, Picasso’s painting is what she looks like.

In 1503, Francesco del Giocondo commissioned Leonardo da Vinci to paint his third wife, Lisa. The resulting portrait is the most famous painting in the world, Mona Lisa. (“Mona” is like “madam” or “my lady”.) 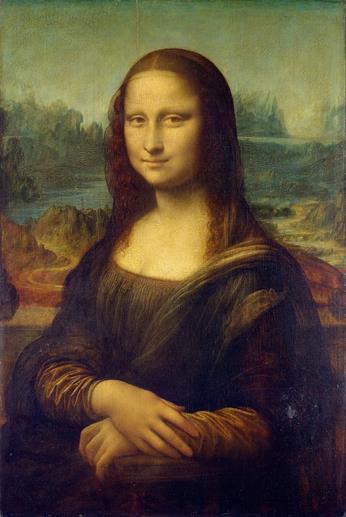 Lisa sits facing us, with an expression that has been described as an enigmatic smile. (Isn’t it more fun to notice she has no eyebrows?) I will admit; I don’t think she is smiling. To me, the idea that she is smiling comes from her name more than her expression. Her married name of Giocondo translates to “jocund” in English, meaning cheerful or happy. The painting is known in Italy as “La Gioconda,” the feminine form of the surname. But I have been overruled. Her smile has entered popular culture; Nat King Cole even sang about it in the song “Mona Lisa.” This painting has captivated viewers for more than five hundred years. When I visited the Louvre in 2000, Mona Lisa was popular, displayed in its own room. But it seems the crowds have multiplied in recent years. So there is still something very special about this painting.

Check out earlier posts that include portraits of Frida Kahlo and Whistler’s Mother. And for more about Leonardo da Vinci, read The Last Supper.