1937. Nazi Germany was in its heyday. Leaders in other countries, Benito Mussolini in Italy and Francisco Franco in Spain, were motivated by the same things as Adolf Hitler and used the same tactics to acquire power, at any cost: rallying the country around the flag, appealing to their countrymen’s sense of loss, stirring up hate for those not like them, promising to make the country great again with law and order and traditional values, something only they knew how to do. Dictators, and wannabe dictators, love each other.

Today’s story is about Franco, Spain, and the country’s greatest artist, Pablo Picasso.

Spain was in a civil war between the Nationalists led by Franco and the Republicans. The Basque Country in northeast Spain (home to Bilbao) was a center of Republican resistance with a history of fiercely independent culture that continues today. Franco decided to quash the Basques by destroying their center, the town of Guernica. Fascists think alike, so he asked Hitler for help. Adolf was happy to oblige since it would give him a chance to test new military equipment.

Monday afternoon, April 26. With many men off fighting the war, mostly women and children were gathered in markets at the town’s center when Nazi warplanes appeared overhead. They started with artillery fire, destroying some houses, water lines, and bridges out of town. For two more hours incendiary bombs were dropped, resulting in what German Colonel von Richthofen described as “complete annihilation.” Fighter planes swooped low to machine gun residents who ran into the fields to escape the destruction. 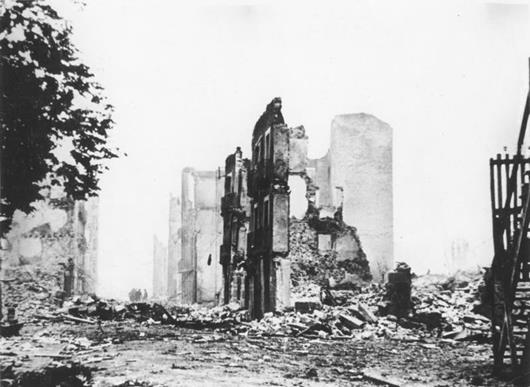 Like the fires that spread throughout Guernica that day, news of this horrific attack of a purely civilian target far behind the front lines spread across Europe and the United States.

Picasso had been commissioned by the Spanish Republican government to make a mural for the Spanish pavilion at the1937 Paris world’s fair. He was working on sketches when he heard of the bombing of Guernica. He changed the subject of the painting and prepared a huge canvas, 11 ½ feet high and 25 ½ feet wide! With basic materials, flat black, gray, and white paint, he began to capture the horror.

Every time I see the painting, even when I just think of it, its simple shapes and lines stir up feelings in me. The faces affect me the most. Like the mother’s face as she cradles the baby hanging lifelessly from her arms. The face of the woman engulfed in flames on the right. I can almost hear piercing screams of physical pain and of grief. I imagine the people yelling out, “Why? WHY?” Even the face of the horse with a gaping hole in its side stirs me. Its agonized, primal cry makes the horror even worse.

I am taken by the woman whooshing into the room with an oil lamp, shining light on the grim scene for the whole world to see, just like Picasso’s painting does. More than any newspaper article could, the painting caused the world to take notice of what happened that afternoon in Guernica.

There are many symbols and layers of meaning, like the light bulb or the flower that grows out of the broken sword held by the dismembered soldier. But Picasso never explained any of that. And I won’t try because the painting should first be experienced viscerally, not intellectually. But I encourage you to read the theories. The more you look, the more you will see.

After the fair, the painting toured the world in various shows, sometimes to raise money for Spanish war relief. Picasso never returned to Spain after 1934, and he insisted that the painting not be moved to Spain until it became a republic. He requested that the Museum of Modern Art keep it safe until then. After Franco died in 1975, Spain became a constitutional monarchy. Guernica could go home. But MoMA didn’t want to give up one of its greatest paintings, so it argued that Spain was still not a republic. MoMA finally relented in 1981. Guernica was displayed at Madrid’s Museo del Prado and another museum. In 1992 it moved to its own room in the Reina (Queen) Sofía museum. That’s where I saw it.

When I entered the Guernica room, it was like going to church. In the huge space housing the huge painting there was a crowd, long rows of people standing across the room from Guernica in silent contemplation. (This was different from most museum galleries, where there might be a couple people sitting on a bench in front of a painting, but often just resting or checking social media.)

When I see a significant painting, I always get as close as allowed, for two reasons. First, I want to see the hand of the artist: the blending of the paints and the brushstrokes. Second, I know that, when I stand close to the painting, I stand exactly where the artist once stood as he touched his brush to the canvas. What a thrill to stand where Leonardo da Vinci or Frida Kahlo, Jean-Michel Basquiat or Mary Cassatt, Rembrandt van Rijn or Georgia O’Keeffe stood. 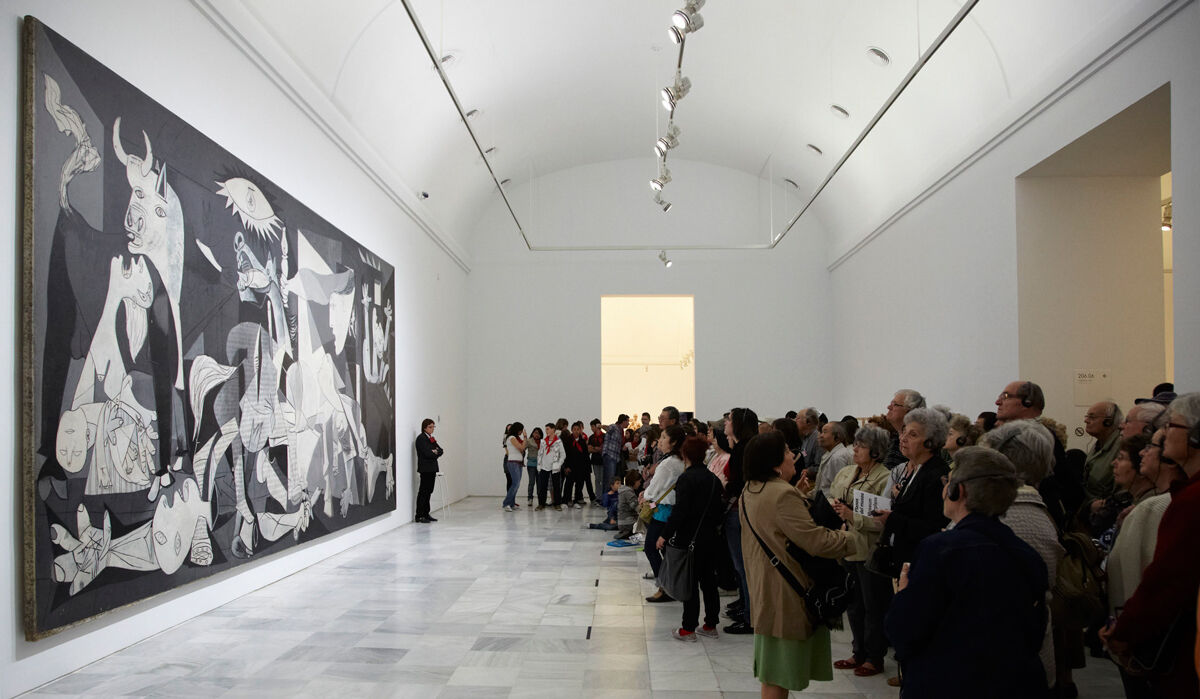 So I walked toward the painting, being really careful to look for the tape on the floor we should stay behind. But before I got near the tape, the alarm went off! I didn’t worry that a guard might scold me, but it was the only time in my life I thought I might be attacked by a mob. I didn’t feel bad for the painting for I knew I was not going to hurt it. But I felt bad for the crowd; I had disturbed the sanctity of their moments with the painting.

Standing silently in that room with the Spaniards, watching how they stared at the painting, how it reminded them of the brutality their country suffered, how it reminded all of us of the worst of human nature, I experienced the painting in a way I never had when seeing it in books. Guernica is perhaps the best example of the power of art.

One of my favorite quotes in art history occurred during the Nazi occupation of Paris. A German Gestapo officer in Picasso’s apartment saw a photo of Guernica and asked, “Did you do that?” Picasso replied, “No, you did.”